I received two letters and two papers from you in this mornings mail and as you are going to the Ferry, thought I had best write you a few lines and send there. There is not much news to write you this time. The Navy is all the excitement in company now. William Avery is making out their descriptive lists this afternoon. There is over 20 going from this company. I think I shall be lonesome when the boys go but I am not going yet and perhaps not at all. It will take more than half of the men in our company if all pass who have put down their names.

I should think that Lucy Frost Brown was counting chickens before they were hatched by her making so much fuss over her prospect, but I suppose she counts on the hatching of her chicken as a sure thing. I do not know what a happening is. You speak about the pictures I drew on the top of that letter as being poor. Well I done it in a hurry and thought it was poorly done at the time.

You also refer to our parting at Fort Monroe. I think that was one of the best things that was ever done there. I mean the most heartfelt and sincere. I often think of that parting for I would have given everything I had in the world to have gone with you. But I have got over it now and am settled into a soldier’s life once more. But I am ever full of hope that something will come to help me yet, or that the war will end suddenly and surprise us all.

I was on picket last night. It was a rather disagreeable night. Did not rain hard but kept misting so that we were quite wet this morning. We drew five days rations of flour a few days ago instead of hard bread, so we make griddle cakes and they go very well for a change.

Co. F has gone into the city to do guard duty so Solon Moxley gave us some boards and we have put on an addition to our tent so now we have plenty of room. We have two doors, one in front and one in back. Mr. G[allup] is well and so is Mr. [William] Avery, but he does not make as good a tent mate as Mr. Gallup.  I used to think that Wm. was one of the best of men but I find he has many faults the same as the rest of us. I think his wife must manage their family affairs or it would cost them $2,000 a year to live. He says she saves all his money. I will try and write you a longer and perhaps better letter next time. I believe I wrote you not to show Thos. Latham’s letter to anyone for if you should, it might get back to him that his letter had been circulated &c. So do not let anyone see it except Julia. I guess I should show it to her if I was home. I will draw her some of those shirts and send if I have a chance. There is no express goes from here.

My love to all with extra rations for you and a kiss. — Thomas L. Bailey

Tuesday noon. The mail boat came this morning but brought no mail for our regiment. I do not know the reason why it did not come and this confirms what I wrote on the other sheet “that my letters are bound to all come at once.”

The excitement about shipping in the Navy was great last night. There is 27 names down on the application in our company. If they all go, it will about spoil the company. I did not put my name on but almost made up my mind to once. Lt. [Alvin M.] Crane of Co. D is shipping agent for this place. The boys spoke to his about the state bounties and he said if they wanted to wait until he could get an answer from Gov. [William Alfred] Buckingham, he would write him and see what he said. So I suppose he will write, but there is some in the company that will go anyway. There is very few, if any, from other companies in our regiment. I suppose the reason is there is no sailors in them. I shall not go at present unless I hear something more. I do not think the danger of being killed or getting sick is as great in the Navy, but they do not get any furloughs or have as many liberties as we do.

Our regiment has never seen much fighting yet and it does not seem possible that it can through the whole three years without it. But we can only hope for the best, trust in God, and wait the result. You mustn’t cry over this for I did not write it for that purpose. I wrote it so that you could see how my mind stood and then write me what you thought about it.

I am feeling well and we have got a nice camp and are having good times for soldiers. I shall think strange if we do not move soon, for that has been our luck when we get things fixed up in good shape. Please write as soon as convenient after receiving this and giving the matter due consideration. Here are two kisses for you, — Thomas

I have not had a letter from Robert in some time. Give my best respects to Noyes & Mary & Jim & Gustia and all our relations. I should think Gustia would be pleased with the socks. Tell her I would send her a name for it is she is bothered for one. — T 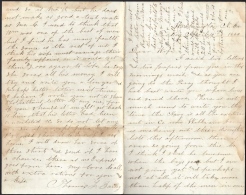