I believe it is just a week since I wrote you. How do you like the idea of my writing only once a week? I will write oftener if you wish me to.

We had a very severe thunderstorm yesterday afternoon just before sunset. I never saw it rain harder. The ground was flooded so that the water was over shoe for an hour. I think the soldiers that were out in the pits must have had a hard time and I should judge from the continual firing they have kept up this forenoon that they have been either making or receiving a share. I do not like to hear the firing although I am, comparatively speaking, out of danger for I know that some poor fellows get hurt during each of these engagements.

Grant has been making some new moves. One up the James at a place called Deep Bottom and one upon the railroad between Petersburg and Richmond. Some claim he has been successful in both places and others say that it has been a defeat. I do not know which is true, but should think the latter the most probable as that is in accordance with our past history during this campaign. I see by the papers that there is some hopes of an armistice. I hope the people will labor for it and gain their points for that seems to me to be the only way now. We may fight until doomsday if we hear to some few, and be no better off in the end. I am for having a cessation of hostilities if it lasts but a short time.

I received a letter from you only a few days since. I told Dwight [Satterlee] that Libbie Davis wanted to know what he thought about her marriage. He laughed and then we had quite a long talk about that and other things. He received a letter from his mother a short time since in which she said, “she thought there would be a Little Thomas or Ellen down to Jane’s soon.” He spoke to me about it and seemed to think it must be you instead of Jane. I knew he done it to joke me so I let him say all he had to before I explained the case. He asked me the other day if I did not wish I was single again. I told him no. I think he will be married if he ever gets home to stay long.

I did not know that Dwight had written anything about my tent. I thought I had written you all about it. Well the one he wrote about has since been taken down so as to put up a store tent. But I have put up mine close by where the old one stood. It is nothing very nice but I can get along nicely with it while the weather is warm. It is a shelter tent with a lush house built over it so as to keep off the sun in the heat of the day, and I have a bedstead made of poles with barrel staves put across and then I have straw and two blankets so I sleep good. I have a little table made of a box and a stand made of a barrel head and a cupboard made of a box and a seat made of a box. That completes the list of my furniture. I would like to have here to see it but think you would not want to stay long.

I have been try my hand at writing with the slant the other way. How do you like it? Was the envelope you wrote about directed that way?

Monday morning. Mr. [Charlie] Gallup was down to see me yesterday. He is some better than he has been but is night-blind. There is a good many in the army that are troubled in the same way. They cannot see at all after dark. Mr. Gallup says his wife is going to Mystic soon to keep house for her mother so if you want to see her, you will have to go soon.

We have got lots of work to do this forenoon so will not try to write anymore this morning. With much love and many kisses, I am your ever fond husband. — Thomas L. Bailey

Monday morning 8 o’clock. There is a nice breeze of wind which makes it nice and cool this morning. The cars were running nearly all night between Petersburg and Richmond and it is thought by some that the Rebels are evacuating Petersburg.

There was a considerable firing yesterday and last night but I have not heard the result. Capt. [Isaac D.] Kenyon of Co. B (our regiment) was mortally wounded a few days since [18th]. He was a tall man — perhaps you might have seen him in Norfolk. Mrs. Charles M. Gallup has heard from her brother Albert that was in the Battle of Drury’s Bluff. He is a prisoner in Richmond. He was not hurt.

I have not received the papers which you have sent so I think it is not worth while to send any more at present. I told Dwight [Satterlee] what you wrote about coming here &c. He says give her my compliments and tell her I will give her the cow if she will come. The cow does not give milk but he thinks it will in two or three months.

I have not heard from Robert since I saw him. I must write his a letter soon. There is a field of corn close by our camp so we have had green corn several times. We have also had some apples but they have been brought here. We have not had any melons lately.

I should like to have been with you on your visit down to Mr. Babcock’s and John Perkins’ so as to have got some of the pears. I shall look for a letter from you tonight.

Tell [your brother] Christopher I am greatly obliged to him for the interest he takes in the Toothpick and that he must try and use her enough to pay for the trouble and expense he has been to in having her painted &c. Have you heard from Latham’s wife lately? I shall expect to hear of Eb[enezer] Stoddard’s arrival home soon. Give my love to Mother Brown, Sister Julia, and all the other sisters and friends. I am as ever your devoted and loving husband, — T. L. Bailey

I went to the Christian Commission tent last night with the intention of attending their meeting but when I got there it was out. I have heard from Mr. [Charlie] Gallup. His knee is better. Jared Avery who has been here in the hospital as a nurse was sent to the regiment Saturday. He is a brother to William Avery. 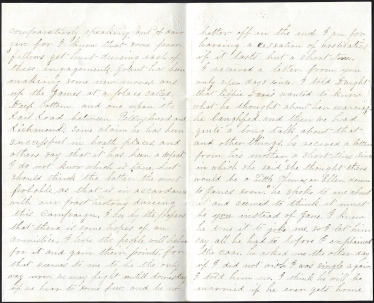 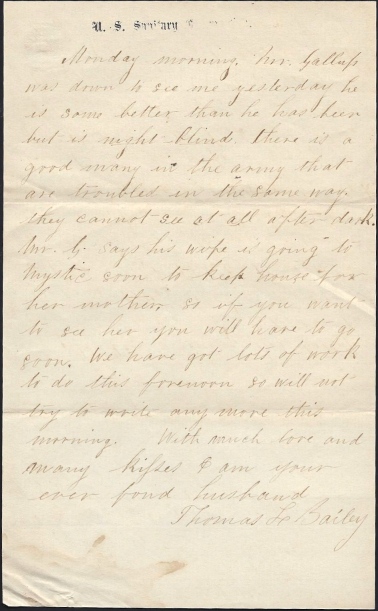