I received your letter last evening and as ever was glad to hear from you.

I am glad that Mr. Latimer is not going back to Washington to stay this winter for I should think he would much rather remain in New York where he could have his family with him, even if his salary is not quite as large, and then you can stay with Emma this winter just as you have done. But next winter I think I shall be home to claim you myself, or at least I hope so. I was not a little surprised to hear that Emma Cornell was contemplating matrimony this fall. I did not think she was old enough, but these girls seem to grow up to be young ladies before we are aware of it. I hope she will do well and it may be all for the best for her to marry now. It would be quite a joke if Emma should marry and get the start of you in family affairs.

I hope [my brother] Robert will have a good time with his Tabbie and if he should have the measles, hope he will get as much sympathy as I did from you before they broke out. But you was good to me after you found out that I was really sick. I shall never forget the morning that you brought water for me to wash my face and I told you I could not, and you done it for me. I have often thought of that little incident and have always liked you for it.

Dwight [Satterlee] got back this morning. He did not go to New York as he expected. They only went to Fort Monroe. He has just received a letter from his brother Charles who is now at Norfolk in a gunboat. Dwight says he is going down tomorrow to see him. He did not know that he was there when he was at the fort. I have forgotten the name of the boat he is in.

There is much rejoicing here on account of Sheridan’s victory. I wish there was more of the same sort of victories in our army for then I should think there was some hopes of ending the war.

Our new camp is progressing slowly. I think we shall get into it in about two weeks more. It is now nine o’clock so I will close for tonight and so finish this tomorrow. Good night and a kiss.

Monday morning. It was quite cool last night — almost cool enough for a frost — but is going to be a beautiful day. There was considerable cannonading last night on our line and some cheering. I do not know the reason of it but some say there has been another victory. I hope it will prove to be so.

The Dr. has put me in charge of a squad of men to work on the new buildings today. I do not feel very highly honored on that account. I do not think of anything more of interest to write you this morning. Give my love to all. With love and a kiss, I am as ever your — Thomas

P.S. If I have time, will write to [my brother] Robert today. I would write to [my sister] Julia Marlatt and send in this if I had time today but I shall be quite busy I expect.

Monday eleven o’clock A.M.  I have been off all this morning with two teams and twenty men after bricks for chimneys to our new quarters. I had verbal orders from Dr. Satterlee to go and take down some old chimneys but when we got there, the Lieutenant who was quartered there with his ambulance train would not let them go without a written order from the medical purveyor so of course we had to leave them. We had no right to go for them without an order but Dwight must act out his Satterlee disposition once in awhile. He is just the same as he used to be about that and goes into things in his thoughtless way once in awhile.

Dr. Merrill is in command when Dwight is away so I have got to go over the river with my teams and men this afternoon to try for brick by his order as Dr. Satterlee has gone to Norfolk to see [his brother] Charles. I thought I should only make out a short letter when I commenced but if I keep on I shall soon have a long one. It is very warm now. That is the way the weather is here now — hot days and cool nights. I shall  want to know how Robert makes out with his courting visit but I guess he will have a good time. — Thomas

I am glad you got an answer from Miss [Josie H.] Holden. ¹ I thought I had mentioned writing to her in my letter to you.

¹ Josephine Harriet Holden was born on 26 February 1849 in Westminster, Worcester County, Massachusetts. She was the daughter of Amn B. Holden and Harriet Smith. Her letters to Nellie Bailey, and earlier to Thomas, are transcribed below. 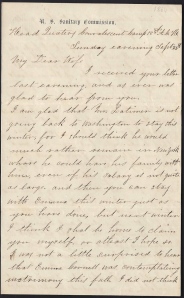 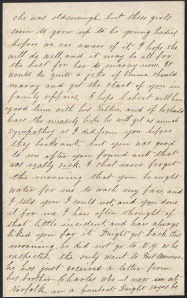 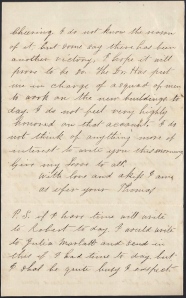 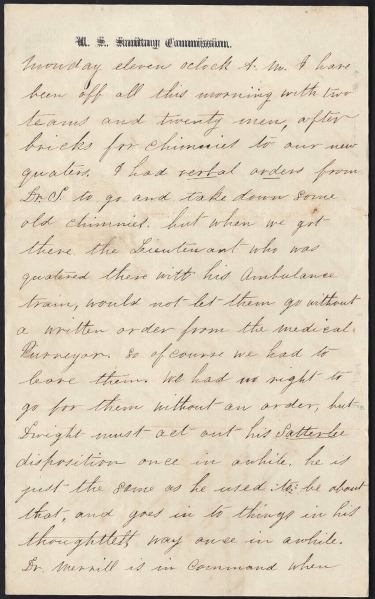 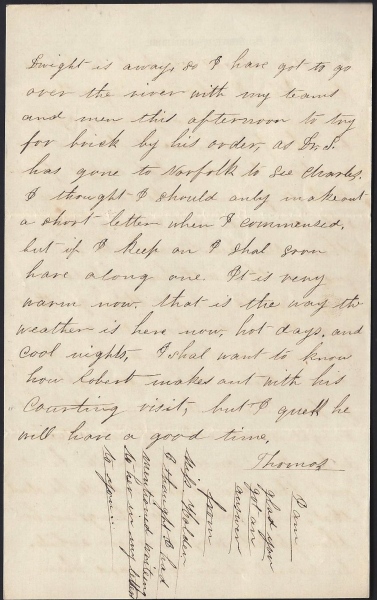 Your kind letter was gladly received this afternoon and I thought I would write a few lines but as I am a “school girl” and have my lessons & compositions to get, I have not much time for letter writing and I guess my correspondents think so for 10 letters are in my writing desk as yet “unanswered.” I attend the High School taught by Wm. Putnam A.B. I do not get out of school until 5 o’clock and this P.M. he was unmercifully cross to some although he did not vent his rage upon me. He excuses all but 6 of us girls to go on an Association which is being held here.

But enough of school trials. My home is about 50 miles from Boston. My father is Lieutenant in the Heavy Artillery, Co. D, Fort Warren, although he is at this time at Fort Pickering, Salem. My mother & brother are also with him and I am left all alone in my glory “keeping Old Maid’s hall” but I do not stay alone for I find enough girls that are willing to assist me.

If I had a “carte-de-visite” you might have one, but as I have none at the present, I shall have to tell I guess if you saw the original that would be enough. I am 15 years old and of course you wouldn’t want any photo. I have not given ¼ of my friends any, if “friends: I call them.

I received your husband’s (Mr. Bailey’s) letter dated August 2 but have neglected writing. You can inform him of my pleasure in receiving a letter from him, and he spoke in preference of my answering an “unmarried man’s letter” as I have received 7 soldier’s letters (all unmarried) and none have received answers as I prefer answering better & smarter letters & also from those I am acquainted as I have enough of those to answer. But time & space forbid me writing more. Excuse mistakes & composition. Good afternoon. From one who wishes to be “Your Friend,” — Josie H. Holden

Please tell Mr. Bailey that his letter was called “decidedly the best of the 8 I received by all who read them. Please answer soon. Oh, I had almost forgotten to ask for your photo. Please send me one. I should also like Mr. Bailey’s. Please send them. — Josie 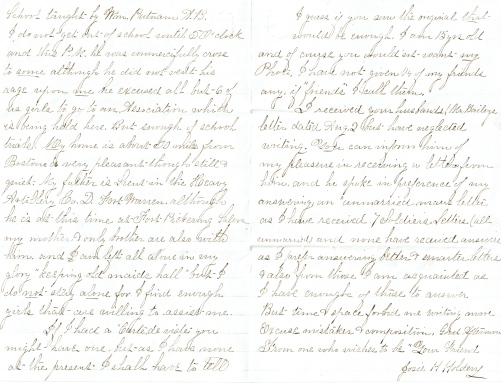 There is in this town a society called “The Children’s Benevolent Society.” They meet once a month. They are now making little comfort bags for the brave, good soldiers.

I live in the centre of Westminster — a very still, quiet town. We had a war meeting here last Monday eve. Only one (that was a returned soldier) enlisted. Shouldn’t you thought they might more have enlisted & come and help you fight. If I was a man, I guess I would not be a coward but some had rather be a “live coward that a dead hero.”

How is your health? Hope it is good. My father has gone to war. He is at Fort Warren. I have one cousin three too and another at Newbern.

I am going to school now at the High school.

Did you hang up your stocking Christmas? There was a levee & a ball here last eek. This week there is a Panoramo, a donation party at the minister’s, and the dedication of the Baptist Church. When are your coming home? Do you have anything fit to eat? Be sure and write a great long letter.

I have got one little black kitten. Do you have any cats where you are? I should not be lonesome if I had a cat no matter where I was. Won’t you please write a long letter and tell me if you were glad to receive this comfort bag?

Do you have any papers or books? I should think you would be tired of fighting, aren’t you? My father went down to Harrison’s Landing but he was so sick he had to come home. He resigned but has gone as he went before. I hated to have him go but he won’t resign again unless he is sick. I am glad he is not a coward. Ain’t you? But goodbye, dear soldier. With the best wishes of a friend.

I remain your true friend, Josie

P.S. Write soon as received. Give my love to all. I should be ashamed of my father if he was a “Coward.” “Good” he is not.