I have received two letters from you within the last week and meant to have answered them ere this but there has always been something to prevent me from so doing when I felt like writing. So you have been to New London on your long anticipated visit at last. Well, I am glad you met with Mrs. Avery and Gallup for I think they must have been glad to see you. I think you must have had a sweet time at the Fort and your sail with Baker must have been delightful. I think he means to kill some of you girls yet, and so pay up some of his old scores for you know he used to get out of humor with us often.

It is terrible cold here this morning for this time of year. I slept a little cool last night although I had three blankets over me and I thought of you and a good bed, but I was well off compared with some of the poor fellows who had to lay out on the ground without as much as a blanket. But his cool weather will not last long for I do not think it is late enough in the season for steady cold weather.

One of the clerks that used to write for Dwight [Satterlee] has been detailed at General Butler’s Headquarters so Dwight has taken George Meech in his place, but I think George had rather sayed in his old place for he had more leasure time there than he will get now. But he would not want Dwight to know but that he was well suited.

I shall not try to inform you about the military position and condition of the army for I do not know much about it and so will refer you to the papers for such news. Our barracks is full and we have a large camp beside. We reported seventeen hundred men on our report last night and I suppose the Hospital has a thousand or more. So you will see that there is a great many men to feed and care for and it is impossible to make them comfortable with what we have. I often think of the Rebels in their destitute situation and wonder how they manage to take care of their sick and wounded. I should not think they could hold out through this winter, cut off as they are. But they are determined to gain their independence or die before they will give up.

I received a letter from [my brother] Robert a few days since in which he pretended to give an account of his Hurlbutt campaign, but he did not go in to the small items so I do not know much about it except that he had a very sore finger and that he and Tabbie had Father Hulbutt’s team to ride around the place in. I thought from what he wrote that he was somewhat disappointed in not going on the steamer Columbia but it may be all for the best in the end.

Dwight has sold his old horse and has gone after another one today — or at least said he was going. You wanted to know what Dwight’s man did who is about going out of the service. Well, he does not have any particular thing to do but he used to take care of the stoves, medicines, &c. but now he does the same as I do — that is, to look out for things generally. I shall miss him when he goes home for he is a good, jovial fellow. You think we must manage to see each other this winter but I cannot see any way that looks consistent we will improve it.

Give my love to Mother Brown and all the other friends and accept for yourself my love and best wishes with a sweet kiss.

I think I shall write to Robert today if I get time. I suppose Mrs. G. will be gone before this reaches you but if you see her again, you may remember me to her and tell her I have not forgotten the time her chair let me down. 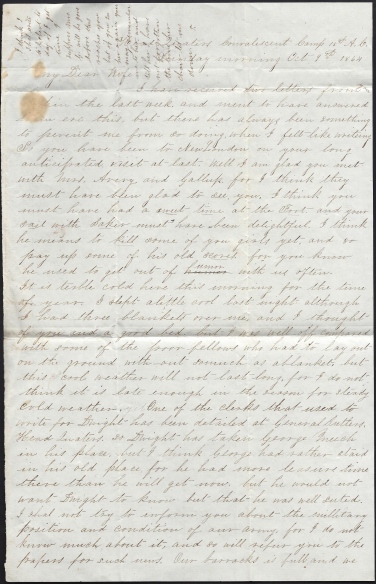 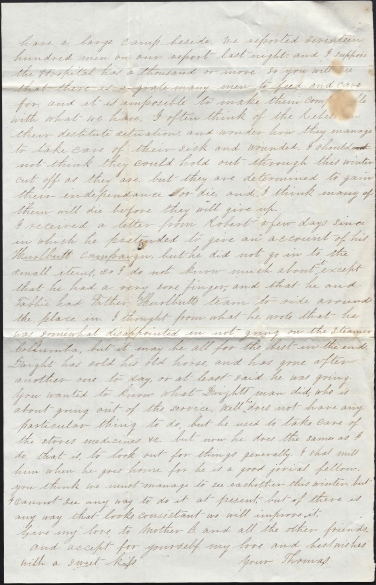